This week, your student will work with data and use data to answer statistical questions. Questions such as “Which band is the most popular among students in sixth grade?” or “What is the most common number of siblings among students in sixth grade?” are statistical questions. They can be answered using data, and the data are expected to vary (i.e. the students do not all have the same musical preference or the same number of siblings).

Students have used bar graphs and line plots, or  dot plots, to display and interpret data. Now they learn to use histograms to make sense of numerical data. The following dot plot and histogram display the distribution of the weights of 30 dogs.

A dot plot shows individual data values as points. In a histogram, the data values are grouped. Each group is represented as a vertical bar. The height of the bar shows how many values are in that group. The tallest bar in this histogram shows that there are 10 dogs that weigh between 20 and 25 kilograms.

The shape of a histogram can tell us about how the data are distributed. For example, we can see that more than half of the dogs weigh less than 25 kilograms, and that a dog weighing between 25 and 30 kilograms is not typical.

This histogram shows the weights of 143 bears. 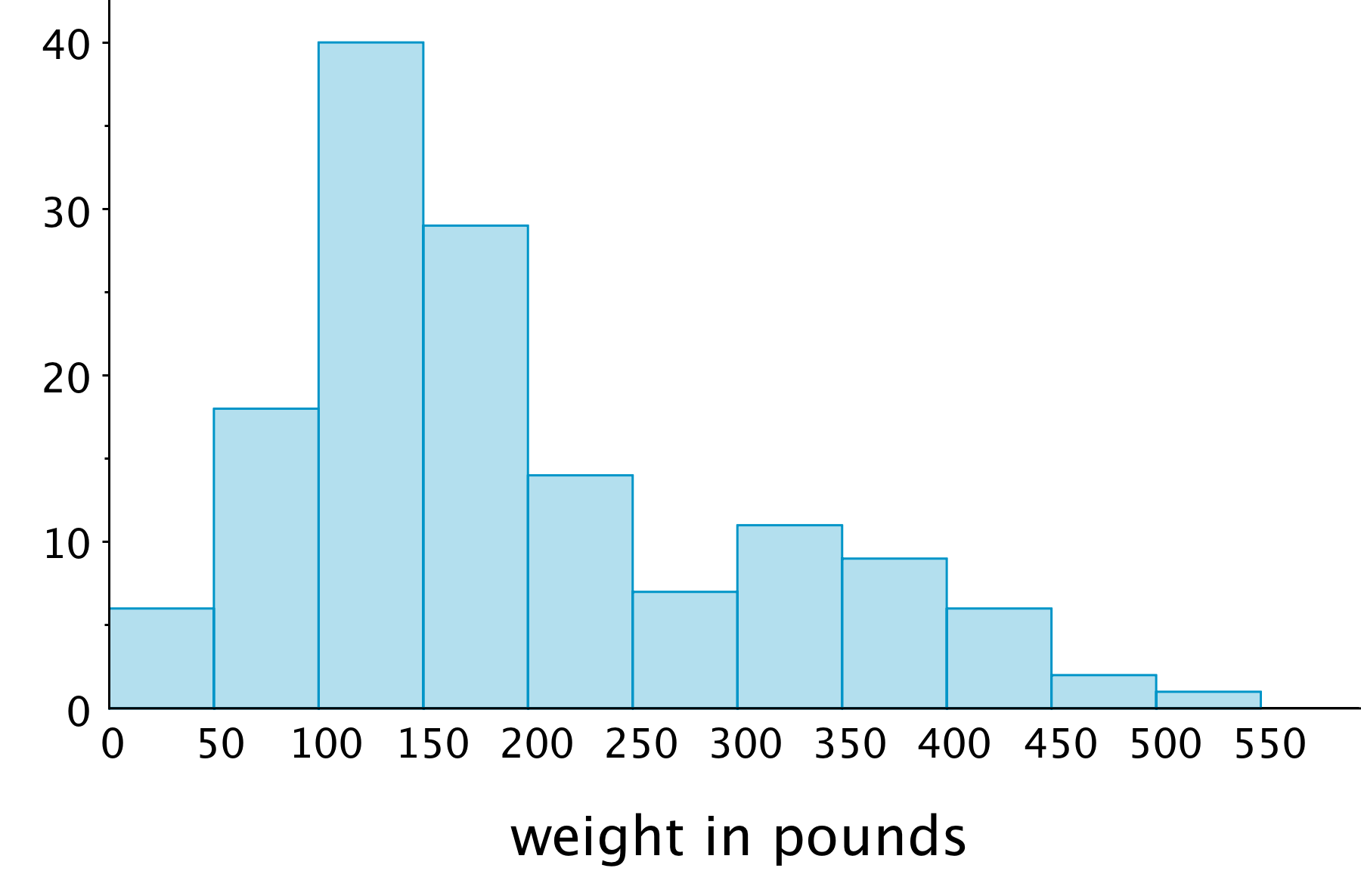 This week, your student will learn to calculate and interpret the mean, or the average, of a data set. We can think of the mean of a data set as a fair share—what would happen if the numbers in the data set were distributed evenly. Suppose a runner ran 3, 4, 3, 1, and 5 miles over five days. If the total number of miles she ran, 16 miles, was distributed evenly across five days, the distance run per day, 3.2 miles, would be the mean. To calculate the mean, we can add the data values and then divide the sum by how many there are.

If we think of data points as weights along a number line, the mean can also be interpreted as the balance point of the data. The dots show the travel times, in minutes, of Lin and Andre. The triangles show each mean travel time. Notice that the data points are “balanced” on either side of each triangle.

Your student will also learn to find and interpret the mean absolute deviation or the MAD of data. The MAD tells you the distance, on average. of a data point from the mean. When the data points are close to the mean, the distances between them and the mean are small, so the average distance—the MAD—will also be small. When data points are more spread out, the MAD will be greater.

This week, your student will learn to use the median and interquartile range or IQR to summarize the distribution of data.

The median is the middle value of a data set whose values are listed in order. To find the median, arrange the data in order from least to greatest, and look at the middle of the list.

Suppose nine students reported the following numbers of hours of sleep on a weeknight.

Suppose eight teachers reported these numbers of hours of sleep on a weeknight.

A box plot is a way to represent the three quartiles of a data set, along with its maximum and minimum. This box plot shows those five numbers for the data on the students’ hours of sleep.

The distance between the first and third quartiles is the interquartile range or the IQR of data. It tells us about the middle half of the data and is represented by the “width” of the box of the box plot. We can use it to describe how alike or different the data values are. Box plots are especially useful for comparing the distributions of two or more data sets.